When District 9 snuck in to movie theatres in 2009, the general audience only had a vague idea what the movie was about. Whether by poor marketing, or by design, there hadn’t been much word on the street about Neill Blomkamp’s cinematic début, so no-one was ready for an incredible journey exploring the growth of a character from a close minded bureaucrat into one of the more sympathetic roles you would have seen on-screen.

Not only did the movie introduce us to the directorial skills of Blomkamp, but also to the acting chops of Sharlto Copley, who managed to turn the character of Wikus from a person that you truly loathed to someone whom, by the end of the movie, you were really rooting. The movie was a seminal event, showing what could be done when story came first, and made an impact on everyone who managed to see it. D9 was a definite showcase that a film with sci-fi trappings could also delve into the human element delivering a message relevant to society today.

Now, four years on, Blomkamp delivers his sophmore effort in the form of Elysium. Where D9 delved into themes of racism, Elysium focuses more on the divide between the haves and the have-nots, while still keeping the muted palette and gritty lived in realism of the first movie.

Set in a not too distant future, the film spends its time on an over-crowded, disease filled earth populated by the lower classes and on Elysium, a space-station where the rich and privileged live, with access to state of the art technology that can cure any ailment known to man. Living on earth is Max (Matt Damon), who as a child had a dream of living in Elysium, but when the audience meets him as an adult, he has fallen on hard times, living out his parole working on an assembly line. 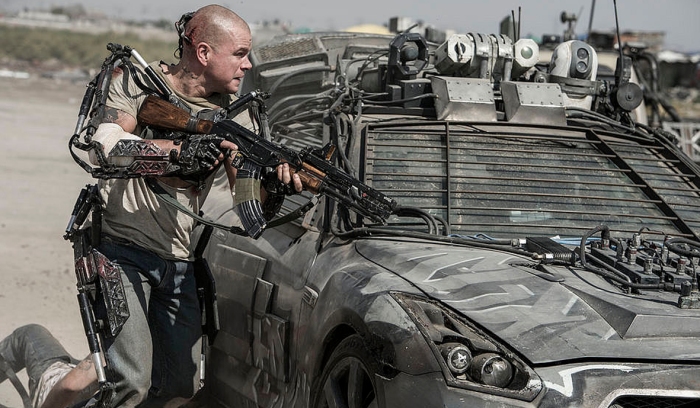 A series of events occur that set Max on a collision course with Elysium and we as the audience are taken along on the ride. Of course, no story would be complete without a great antagonist, and Sharlto Copley returns to play Kruger, an ex military type whose main purpose is to ensure that Max does not get to Elysium. Gone are all the shy and nervous mannerisms that Copley portrayed with Wikus. In Kruger, we have a psychotic despot who will stop at nothing to get what he wants, and whenever Copley is on screen he chews up the scenery around him, making us forget about all the others actors in the scene.

Four years is a long time when it comes to technology and it shows in the visual effects of Elysium. While D9 was so slouch in the FX department, Elysium takes it to a new level, giving a feast for the eyes, and Blomkamp using every bit of it to wow the audience, be it just a panning shot across Elysium or with the heart-pounding action that seems to pervade the movie.

Elysium is not a perfect movie and there are some logical flaws that will make pull you out of the film with a “why did they do that?” but I enjoyed the story, the visual spectacle and the portrayal of the characters. It all pays off in the last act which packed a serious emotional punch, and I think those who liked D9 will not be disappointed with Elysium.