When How To Train Your Dragon hit theatres some four years ago, no-one was expecting it to become the runaway hit that it did. With the right mix of humour, stunning aerial displays and a well-developed relationship between a boy and his dragon that served as the core of the movie, there was a lot to like about the feature film from DreamWorks. So it was a matter of course that a sequel would be green-lit, but the main question was would it capture the innate charm and reckless abandon of the first flick? Well, HTTYD 2 is pretty much a lesson in how to do a sequel right.

Five years have passed in the land of Berk, and the characters have aged from awkward teenagers into young adults. Hiccup has come into his own, utilising an array of technological toys, and becoming a bit of an adventurer with his trusty pal, Toothless. The bond between these two that played such a pivotal role in the first movie is still as strong as ever and just the two interact on screen will bring a smile to your face. It’s so easy to forget that Toothless is the product of a machine cranking out bits and bytes, so well is he animated.

Without going too much into spoiler territory, the characters we grew to love in the first movie are all here, and given more of a chance to grow. In fact a lot of the humour in the movie come from the returning gang of Ruffnut (Kristen Wiig), Tuffnut (T.J. Miller), Snotlout (Jonah Hill), Fishlegs (Christopher Mintz-Plasse), and blacksmith Gobber (Craig Ferguson). Added to this cast are Eret, Son of Eret (Kit Harrington), the movie’s big bad Drago Bludvist (Djimon Hounsou), and Hiccup’s mother Valka (Cate Blanchett).

Cate Blanchett is a real strength in the movie, and you can easily see where Hiccup gets his wild inquisitive nature from, and a scene with Hiccup’s father Stoick (Gerard Butler), is probably one of the most emotionally evocative I have watched in an animated feature. 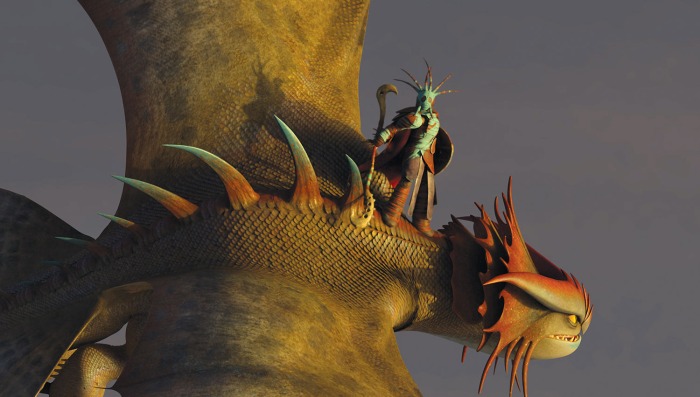 Speaking of animation, it is, needless to say, breath-taking. While How To Train Your Dragon was no slouch in the scenery department, the sequel dials it up to 11, so amazing is the art direction and cinematography. Once again the aerial scenes come front and centre, almost putting you in the dragon’s saddle, zooming through the clouds, with the air whipping past you.

My only quibble with the film is that I think Drago’s character could have been more fully fleshed out. His motivations were generic, and he wasn’t that interesting of an antagonist. But overall I thought HTTYD 2 was a great next step in the franchise, and the movie certainly lays a lot of groundwork for a third movie, which I for one will be lining up to see.