Insane. In your face. Balls to the wall action. Amazing. All these words perfectly sum up Mad Max, and you know what? I loved it every bit of it.

In a world where movies are now bleak, desaturated and brimming with CG effects, Mad Max is a refreshing break from the norm, that hits you at a 100 miles an hour with its bright colour palette, eccentric characters, wild costumes, and practical effects that make you think “Oh my god, did they really do that?” 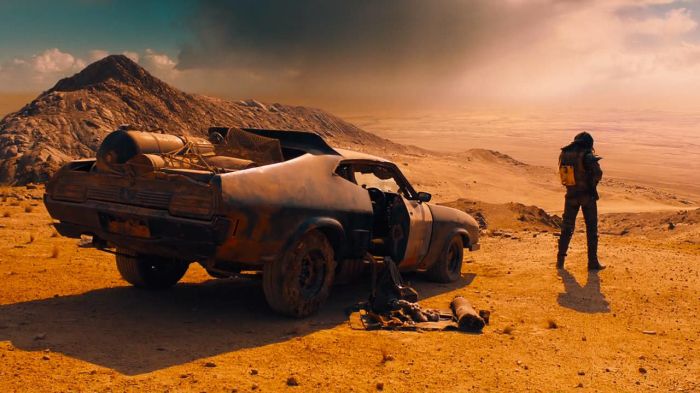 It’s been a while since movie-goers have seen Mad Max. 30 years in fact. In that time a whole generation of the audience has grown up having not seen the first three movies and some not even knowing who Max is. However while this latest instalment does have Easter eggs pointing to its predecessors, you can easily watch this film without any knowledge of what has happened previously. It is made to be just another tale in the legend of Mad Max.

Max (Tom Hardy) is a drifter in a post-apocalyptic Australia. It’s a harsh place, full of danger, where its inhabitants have taken the law into their own hands and where civilization as we know it has crumbled into small pockets of humanity trying to survive in a world with little water, oil or hope. The film opens with a car chase that ends with Max taken prisoner to one of these pockets, controlled by Immortan Joe (Hugh Keays-Byrne), a diseased leader of a people consisting of the poor downtrodden common folk, and chalk-skinned War Boys, a fanatical group of scarred soldiers that are willing to die for Joe to get a chance to live forever in their version of Valhalla.

It is little things like this that really flesh out this world. With the lack of gasoline and fuel, an entire religion has risen around vehicles, where the steering wheel is an object to be worshipped, where there is nothing greater than dying in the chase. But where the War Boys are devout to Immortan Joe without question, the rest of the populace only bows to Joe out of fear and because Joe controls another precious resource, water extracted from deep underground.

Rounding out Joe’s community are The Wives. These are women who are pretty much forced to be Joe’s sex slaves, in his attempt to breed a perfect son. And The Wives play an integral part to the story as the main part of the movie begins when Impertor Furiosa (played by Charlize Theron) helps The Wives escape from Immortan Joe, driving away in a modified war truck to try and find the Green Lands, a place where water is abundant and the land is fertile and lush, away from Joe’s tyranny. This act sets the ball rolling, spurring Joe and his pack of War Boys to chase and hunt down Furiosa and to get his Wives back. 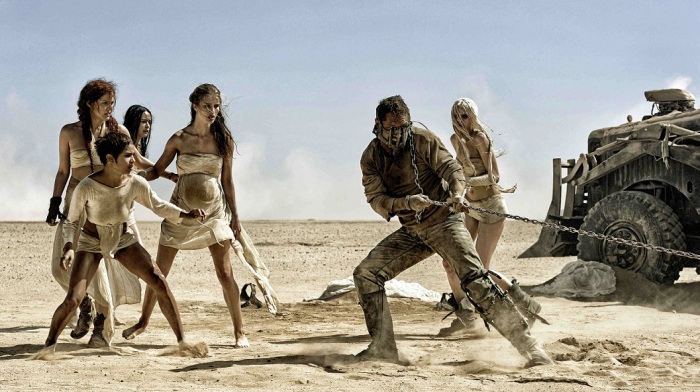 It is incredible that without falling to the clichéd tropes of exposition, George Miller manages to convey the back story of Furiosa, Max, The Wives and even create a whole character arc for Nux (Nicholas Hoult), one of the War Boys, while keeping the action going, the music blaring and all the while having multiple cars, bikes and trucks racing across the screen with explosions being let off left, right and centre. This movie is ultimately a two hour car-chase across a barren, yet beautiful, wasteland and when we do get to a quiet moment, it feels earned, the characters fighting with every essence of their being to get that brief reprieve from their pursuers.

As mentioned before, this is a very gorgeous movie. Where most post-apocalyptic films are devoid of colour, Fury Road is vibrant and just pops of the screen. From sand storms that are just awe inspiring with their swirling red and orange hues, with the occasional bolts of lightning to dazzling flares lighting up the sky, there is always something to capture the eye. Coupled with breath-taking stunts and crazy fight sequences, I would recommend this movie just for the visual aspect alone. But it’s not just the visual sense that is catered for. The score is pulsating and gets your heart-pounding, a perfect match for the events taking place on screen. In fact one of the characters in the film exists solely to thrash an electric guitar while tied to one of the vehicles chasing Max. A twisted, futuristic version of the bag-pipers that used to accompany soldiers into battle. If that isn’t awesome, I don’t know what is.

This has easily become the best movie of the year so far. With a simple story, great action and a fully realised world, I can’t wait to see what the future holds for Max.