Ah the slasher film. The home of slutty girls, dumb jocks, boobs, sex and copious amounts of gore. These B-movie flicks were the staple of the 80’s and provided many a night of entertainment with their groan-worthy dialogue, jump-scares and so-bad-it’s-good acting and special effects. These films have already had their generic structures picked apart by the likes of Scream and Cabin in the Woods, and when The Final Girls starts off, you get the impression that this will be another horror film that winks at the audience as the movie goes through all the tropes of a typical slasher horror. And you would be right…sort of. You see The Final Girls is not only intent on pointing out the horror tropes, it put its character inside a horror movie and adds a whole new meta-layer that takes the film to a new level, while providing the perfect excuse to revel in all the B-movie clichés. 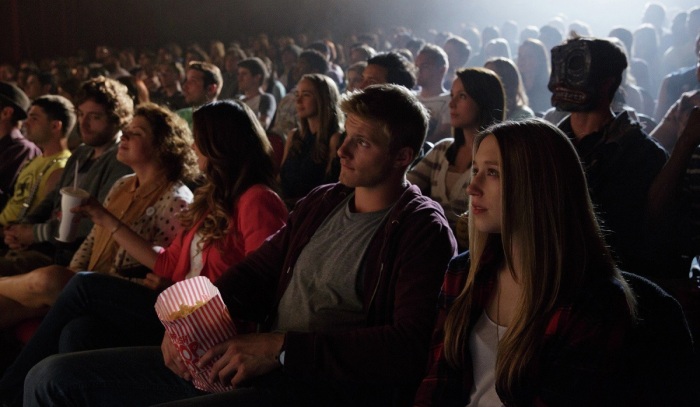 The movie centres on teenager Max Cartwright (Taissa Farmiga). Max’s mother Amanda (Malin Akerman) was a prolific slasher horror actress in the 80’s and now can’t escape being typecast from the genre. Especially due to her role in Camp Bloodbath, a horror film that has now gained a cult following. Through tragic circumstances Max loses her mother and we see Max three years later, still not having moving past her mother’s passing.

On the anniversary of her mother’s death, Max goes to a cult showing of Camp Bloodbath, as a way of remembering her mother. However a freak fire breaks out in the cinema, for one reason or another Max finds herself trapped within the movie of Camp Bloodbath along with her friends. It is here that most of Final Girls is set, and it is here that the movie really takes off.

The movie-within-a-movie setting adds another dimension to the horror standards and allows the writers to have play around with a genre that has become quite tired. As Max and her friends eventually figure out that they are within a movie, they use the tropes to their advantage to best the killer, Billy Murphy (Dan B. Norris), in the movie. Watching the characters react to the wavy lines and loss of colour in the film as they are transported into flashbacks is very entertaining, and so too is their awareness of being in slow motion as they run away from Billy. Allowing the actors to break the fourth wall without actually breaking it is a refreshing twist that makes watching The Final Girls an enjoyable experience.

The score of the film is appropriately very 80’s with modern sensibilities. It serves double duty as selling the notion that this is set within an 80’s film, but at the same time also helping ratchet the tension and amp up the jump scares. The extra cherry on the sound design cake is the sound effect that announces the arrival of Billy. You could almost believe that Camp Bloodbath was a real movie.

Director Todd Strauss-Schulson has pulled off an impressive feat of making something that could have been an absolute disaster into a very fun piece of cinema. I really hope that The Final Girls gets a sequel, as I wouldn’t mind stepping back into this world of horror tropes.