If the Little Mermaid, Beauty and the Beast, Aladdin and The Lion King signalled the Disney Renaissance, then Disney’s foray into the world of 3D animation with hits such as Tangled, Wreck-it-Ralph and Frozen is like the Second Coming. They have proven that they have what it takes to contend with the best that Pixar has to offer, and with Zootopia, they are once again setting the box office on fire.

Zootopia focuses on Judy Hopps (Ginnifer Goodwin), an immensely optimistic rabbit, whose can-do attitude leads her to become the first bunny officer in the titular city’s police force. However, in spite of her achievements during her training, she has still to earn the respect of her fellow officers, especially of Chief Bogo (Idris Elba), who sees Judy as more of a token representative.

This lack of respect finds Judy assigned to parking duty, but even this doesn’t put a dampener on Judy’s spirits and she resolves to be the best ticket warden she can be. But as this is a Disney movie, one thing leads to another, and soon Judy finds herself embroiled in the middle of a case involving the disappearance of inhabitants of Zootopia. Reluctantly assisting her with the investigation is Nick Wilde (Jason Bateman), a local con-man, er… con-fox (?).

One of the many things that Zootopia has going for it is that, much like Pixar, it works on many levels. Kids will love the overall design of the film, with the bright pastels of Judy’s country town, the distinct architecture of the city of Zootopia itself, the incredibly detailed look of all the anthropomorphic animals populating the world and a genuinely funny script. However, adults can also rest assured that they will be entertained as well, with a well written story that explores issues of racial profiling, gender stereotypes and the overall dynamics of a society when placed under stress. While some of this can be on the nose, it’s not done in a heavy handed manner, and lifts something that could have been a generic kid’s movie to another level.

Ginnifer Goodwin has always been a likeable actress, and it’s no surprise that she imbues Judy Hopps with her same innate charm. While Judy can be naive about the world, she is smart enough to learn from her mistakes, and no matter how many punches knock her down it just strengthens her resolve to do better. A great message to pass on to the children of today. Bateman, as Nick, is almost on the other end of the spectrum. A jaded fox who has given up on his dreams and cynical to the core, this is a role that Bateman can play in his sleep. Paired with Goodwin, the duo have an instant on-screen chemistry that makes the whole film work. 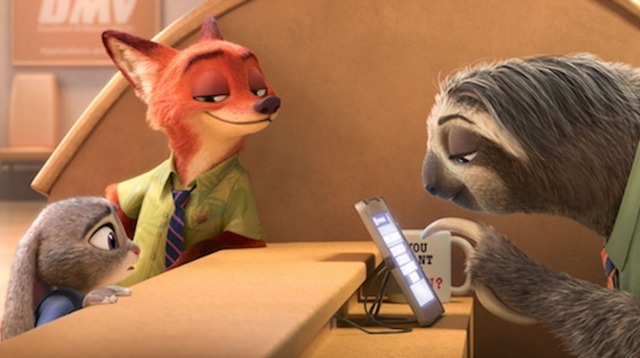 As mentioned before, the design of Zootopia is a standout. Each section of the city is devoted to a different environment from the wintry landscapes of TundraTown to tiny miniature buildings in Little Rodentia. All the animals are drawn to scale, co-existing with each other and using many ingenious methods to deal with the varying sizes of the denizens, which lends to the believability of a society consisting of a multitude of different species. The city with its quirky inhabitants feels so real and fully realised that I can easily imagine it being used for a spin-off TV show, and I for one would love to see that. (Hear that Disney? Get on it.)

So what do we have? A great story? Check. Protagonists worth rooting for? Check. A movie that you can watch again and again? Check, check and check.

I’m loving the resurgence of Walt Disney Animation, and Zootopia is one of the surprise hits of the year.

If this movie isn’t on your watch list it should be. It’s definitely worth the price of admission.