Warner Brothers hasn’t been having much luck with the launch of its DC Expanded Universe (DCEU). While Man of Steel, Batman V Superman and Suicide Squad have been profitable, the movies haven’t really had much love from critics or the mainstream audience. With complaints of being too dour or lifeless, more style than substance, it looked like the DCEU needed a godsend to get it out of the slump it was in.

And a godsend is what it got. Well a demi-god if you want to split hairs about it. Hitting screens with the right mix of humour and pathos, excitement, wonder (pun intended) and a touch of innocence, Wonder Woman finally delivers on the potential that has been promised in the past DC films. 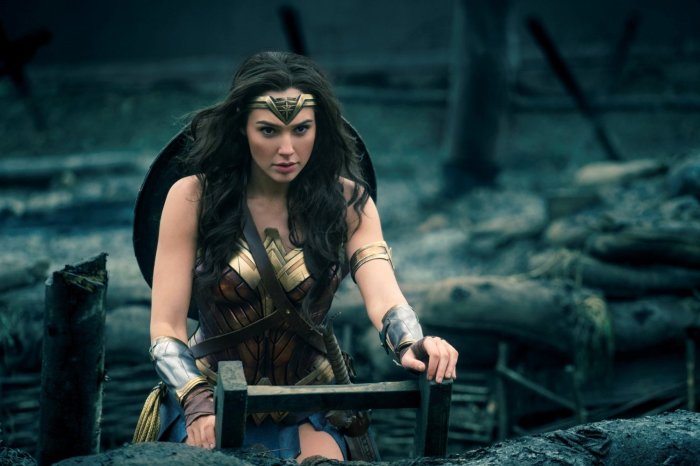 Set during World War 1, the audience is taken to Themyscira, a beautiful and secluded island that is also the home of the immortal Amazons. Keeping away from the world of men, these female warriors have existed on this island for centuries, training in the martial arts. When Diana (Gal Godot), princess of the Amazons, saves an American soldier, Steve Trevor (Chris Pine), from a plane crash, the Amazons discover that the world has plunged into a war to end all wars, and only Diana can put a stop to it. And so, Diana leaves her home to help prevent mankind from destroying itself.

The movie opens with a flashback to Diana’s origins, and right from the start you can see that Wonder Woman is a different beast compared to its other DCEU brethren. Themyscira just pops with colour, from the lush greenery to the deep blue of the surrounding seas. With abundant waterfalls and Greco-Roman architecture, it is a stunning place to behold, full of life and an idyllic setting for the Amazons to go about their day to day. The vibrant colour palette makes it’s way throughout the film, from Wonder Woman’s costume to the British countryside. A far cry of the desaturated colour scheme normally associated with DC films.

Speaking of stunning, the Amazons themselves are quite a sight. Played by athletes, gymnasts and stunt-women from across the world, the warriors were statuesque, imbued with a deadly feminine grace. From the sparring sequences right up to a spectacular battle on a beach, I found the action choreography of the Amazons simply incredible, the creativity and style so different from anything I had seen before, and often felt the adrenalin building up just from watching the fight scenes. And yet what’s even more impressive is that Gal Gadot manages to keep up with all these trained professionals and convincingly plays the chief badass in a group of badasses.

To be fair, Gal Gadot is just one surprise after another in this film. Even though the raven haired beauty proved to be one of the highlights in Batman V Superman, I wasn’t prepared for how good she was in this film. The role called upon Gadot to play Diana as a strong female, firm in her black and white view of good and evil, but overlaid with an innocence and naiveté of someone not used to the western world’s social norms. With a steely resolve that couldn’t quite hide the mischievous twinkle in her eye the next, Gadot’s Diana was infinitely more relatable in her origin story than her Kryptonian counterpart in his.

And while Wonder Woman is Gadot’s show through and through, Chris Pine does an admirable job keeping up with her as Steve Trevor. Pine’s charming nature is on full force here, and is another character that the audience gets quickly attached to. Whilst often trying to prove his masculinity in front of Diana, he also accepts that Diana is more adept than him in numerous ways, and rather than nursing a bruised ego, he goes out of his way to aid Diana in any way possible. It speaks volumes about his character and casts him as a truly worthy companion to Diana.

I do have a few nit-picks with the film. Robin Wright‘s turn as General Antiope, Diana’s aunt, was far too short. Wright had one of the first WOW moments of the film and I wish we could have seen more of her. It was also unfortunate that we didn’t get any Princess Bride references thrown in. OK, I’m not serious about that last statement, but one can dream.

A bigger nit-pick was the musical score of the film by Rupert Gregson-Williams. I felt that, while adequate, it didn’t really live up to the iconic Wonder Woman theme that was set up in Batman V Superman.  Maybe it will grow on me after I listen to it a bit more.

There are also, a few of the special effects felt a bit wonky, and there were times when you could clearly see the CG not really holding up, but this was the exception rather than the rule.   I also don’t know what was going on with the design of the main villain of the film, but I can’t say much without heading into spoiler territory.

It was great to see such a kick-ass movie of a female super-hero, and I hope its representative of things to come in the DCEU. Wonder Woman lived up to the hype for me and I give it an 8.5 out of 10.

Oh, and there is no post credit sequence.  Just saved you 2 minutes of your life.