Have you ever put your headphones on, let the music envelope you and everything else just fades into the background, your actions becoming automatic as you get lost in the rhythm of the song?

That’s pretty much the life of Baby (Ansel Elgort), the titular young driver, who listens to music to drown out the constant hum in his ears caused by a childhood accident. Music is an escape from the seedy underworld he finds himself in, as he works off a debt to Doc (Kevin Spacey), a mastermind behind numerous brilliant (and violent) heists.

This life of crime exposes Baby to the various different personalities of Doc’s crew including from the wildly unhinged Bats (Jamie Fox); the charismatic Buddy (Jon Hamm) and his seductive wife Darling (Eiza González); the tough guy Griff (Jon Bernthal); and the not too bright Eddie (Flea) and JD (Lanny Joon). 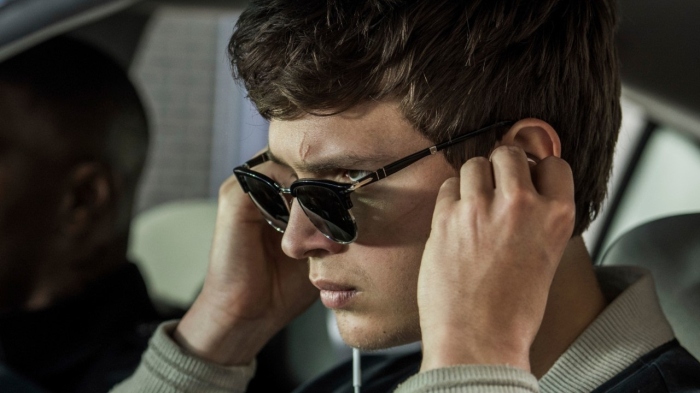 It’s a fate he has resigned himself to but as Baby slowly falls for Debora (Lily James), a waitress at his local diner, he desperately seeks a way to escape this life of crime.

Now, I have always been a fan of music in film. The score plays a huge part in my enjoyment of a movie, heightening the emotions that I already feel. However, with Edgar Wright‘s new flick, the music is not just a background companion but is a whole character unto itself. The tracks move between tinny sounds in Baby’s ear to a full scene-stealing expansive sound, mixing in with the action, often with the scene cutting in and out in time to the song being played. It’s a great supporting character that picks up the energy of the entire movie, and there’s never a scene where a song isn’t present. Even the sound design is set to a rhythmic beat, often creating its own musicality in the rare moments where the music does cut out.

It’s a great creative choice that sets Baby Driver apart from other caper films and one that is complemented by great dialogue and expertly choreographed action set-pieces. Edgar Wright has always taken a sort of comedic heightened approach to his movies and while a lot of the events could take place in the real world, they are pushed right up to the edge of believability. And aiding in that plausibility is the fact that most of the stunts in this film were done practically, with the actors actually in the cars, avoiding the green screen effect that beleaguers other driving-heavy franchises.

Keeping up with all the crazy action on-screen is the unpredictability of the various character arcs. People that you think are going to pose a major threat fizzle out, not living up to their swagger or simply not having much screen time, whilst others start with a seeming benevolence that is stripped away to become the biggest threat.

It’s a simple storyline that keeps you guessing, with a high calibre of acting talent. It’s pretty impressive that the relatively new Elgort and James manage to keep pace with the big hitters like Hamm, Spacey or Fox. And yet Baby’s relationship with Debora is one of the foundations of the story, the two playing off each other with a natural sweetness that belies the ugliness that takes place around them, a light in an otherwise dark world.

There are parts of the film that do drag a little, and some characters feel a little underutilised. But at just over a 110 minutes, the film does manage to move at a good pace for the most part, and it’s understandable that Wright would let some character development hit the cutting room floor for the sake of streamlining the movie.

If nothing else, Baby Driver has given us a great soundtrack to listen to, but as a bonus it also delivers an entertaining piece of cinema. So if you’re looking for something to do on the weekend, give Edgar Wright’s latest flick a go. You won’t regret it.