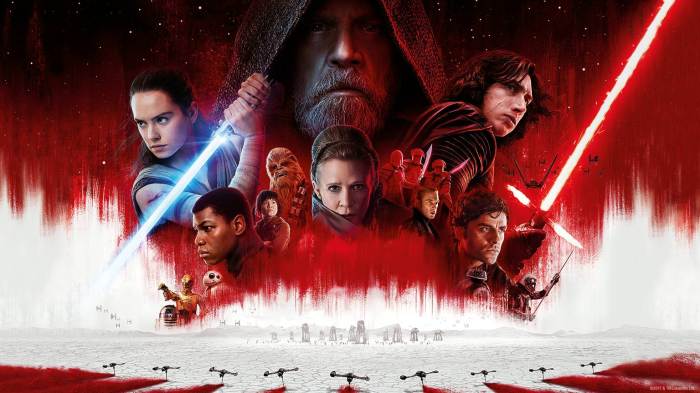 Star Wars: The Last Jedi has hit theatres with a bang and finally answers the question, how much Porg is too much Porg. Just kidding. But, there was genuine interest for the second instalment of the sequel Star Wars trilogy, curiosity about whether the first instalment, The Force Awakens (TFA), was a fluke and if The Last Jedi was going to address the issues that TFA had. From all accounts, Rian Johnson did a great job with the movie and early reviews couldn’t stop raving about the film. Let’s just say the hype was real.

My expectations were pretty high (to say the least) when I got into my midnight screening, ready to enter the Star Wars universe again, and catch up on Rey and her merry friends. And I found the movie… different. I mean, that’s not a bad thing, but it’s not what I would have expected as a follow on from TFA. It took me a while to process, and after watching it twice, I think I have settled on how I feel about the movie.

Now where to begin? Firstly, there’s a more humour in the movie than I would have expected. A lot more. While TFA did have funny moments, the humour felt natural, whereas in The Last Jedi, sometimes the humour felt forced or out of place. It was especially jarring when humour was used with people that you wouldn’t normally associate with light-heartedness or levity. It totally changed the way you perceived certain characters. In fact I would say that the personalities of a few of the returning characters in The Last Jedi were rather different from how they were portrayed in The Force Awakens. Some characters became brasher and in other cases went from heroic to more of a bumbling side-kick. It was rather puzzling and in some cases, not a great choice.

Another thing that stood out was that a lot of the dangling plot threads that were left in The Force Awakens are resolved quickly in The Last Jedi. A little too quickly I might add. It felt like the powers that be decided that they didn’t like the path these arcs were going down, so they decided to give them a quick resolution and be done with them, shuffling them to the side. A shame really because there were some story-lines that I would have really liked to have been explored further in depth, but alas I guess it’s not meant to be. There were even some parts where you could tell the film-makers added a line here or an action there to directly address some of the concerns that fans had with Force Awakens. A thoughtful touch, but some moments came off a bit cheap.

With the story taking over two and a half hours, there were definitely parts that could have been cut out, because they ultimately added nothing to the overall story and served more as a detour than anything else. And that’s the biggest gripe with the film. After a strong start, it started to drag towards the middle before picking up the pace again towards the end. Not quite a show-stopper but a defter hand in the editing room, or maybe a more streamlined script, would have been quite beneficial for the movie. 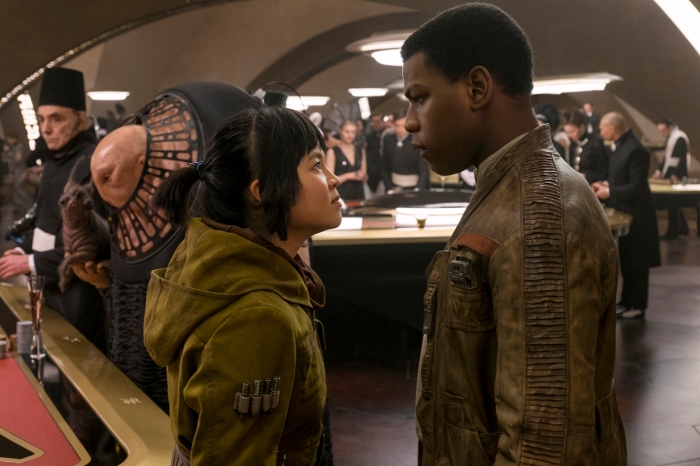 But putting all that aside, when the film worked, it really worked. As before, Kylo Ren (Adam Driver) and Rey (Daisy Ridley) gave strong performances, with Driver especially playing up the inner turmoil going on within him. Carrie Fisher as Leia seems to have more of a hold of her character this time around, finding her groove a bit more than her portrayal of Leia in TFA. It may be that her role seemed all the more powerful due to the fact that we know it was her last, and some of her lines took on double meaning in light of Fisher’s untimely passing. Luke (Mark Hamill) has more to do this time around, and it was great to see the return of this old friend, if in a slightly different light. All of the actors did their job admirably, and newcomer Kelly Marie Tran as Rose Tico slotted right in like she had always been part of the crew.

The action sequences and fight choreography were stunning, bringing elements of a war movie in some sequences and effortless martial arts in others. The skill of the Jedi was always promised in the original trilogy and I love that we live in an age where we can see a Jedi’s potential realised on the big screen. The glowing light sabres buzzing through the air, always breath-taking in their deadly grace. I would say the action set pieces were where The Last Jedi really shone, giving the beautiful cinematography a run for its money.

Of course, I can’t talk about Star Wars without mentioning John Williams‘ score. I am always on the lookout for a compelling new riff or theme that Williams may introduce into a new Star Wars film but I didn’t manage to make out anything that struck a chord with me. Williams seem to be reusing a lot of his themes from the previous films, but I said the said thing about Force Awakens and now after having heard the TFA soundtrack on its own, I can hear a lot of new, catchy themes in that soundtrack, so maybe I need to hear The Last Jedi soundtrack on it’s own for the themes to make an impression on me.

So it probably sounds like I didn’t enjoy the film but I did. I thought that The Last Jedi was an incredibly beautiful and well directed film. But it just didn’t feel like it had the essence of Star Wars and the Original Trilogy as much as its predecessor did. That feeling of the swashbuckling adventure in space wasn’t as prevalent. Or to put in another way, it felt like a movie within the Star Wars universe, but not like a continuation of the trilogy started by TFA. Maybe that’s a feeling that will subside once I finally see the final chapter to close it all off, but at this stage I think I enjoyed The Force Awakens more.

That being said, do go watch The Last Jedi in the theatres. It’s a gorgeous film that deserves to be seen on the big screen, and keep an eye out for a cameo from a past Star Wars Director. Oh and to answer my initial question, there have may have been slightly too much Porg 😉