Black Panther has hit our screens with it claws fully out, a masterful piece of entertainment by director Ryan Coogler, leading a talented ensemble of actors.

The film has all the trappings of what we have come to expect from a Marvel movie, action mixed with healthy dose of fun, even if the jokes in the film comes from places that you wouldn’t normally expect.  But unlike previous Marvel movies, the humour doesn’t revel in silliness or feel forced, not taking away from anything away from the story itself.

The film’s main focus is on T’Challa (Chadwick Boseman), the prince of the nation of Wakanda, as he comes to terms with his ascension to the role of King, a consequence of the untimely demise of his father following the events of Captain America: Civil War.  Rather than the typical hero’s journey that is standard in these comic book movies,  T’Challa’s journey is more of an internal struggle, trying to decide between protecting his people and what he thinks is right.  It’s a pretty heavy weight for someone new to the mantle of king to carry.

But Black Panther is also a movie that explores themes of abandonment, matters of perspective and how isolation or an insular approach to a society can cause more harm than good.  It posits the main antagonist, Erik Killmonger (Michael B. Jordan), as what T’Challa could have been, if fate had taken his life down a different path.  Another side of the same coin.  Killmonger’s motivations in the film are not to do with world domination or some planet-destroying MacGuffin, but more around trying to bring a better life for his kindred.  A perspective that makes him one of the better villains that the MCU has had.

And while the rivalry between Killmonger and T’Challa is the driving narrative of the movie, I found that it’s the other Wakandans that really captured my attention.

Shuri (Letitia Wright), T’Challa’s brilliant younger sister, was a constant delight when she was on screen.  Responsible for a lot of Wakanda’s technological advancements, she takes on the Q role for Black Panther, providing a constant source of cool gadgets and gizmos to help her older brother.  Though her help always came with a healthy dose of quips and barbs, often at T’Challa’s expense.  Shuri’s playful nature added a light touch to the film with Wright and Boseman totally nailing the sibling dynamic, further emphasising the importance of family in Wakanda. 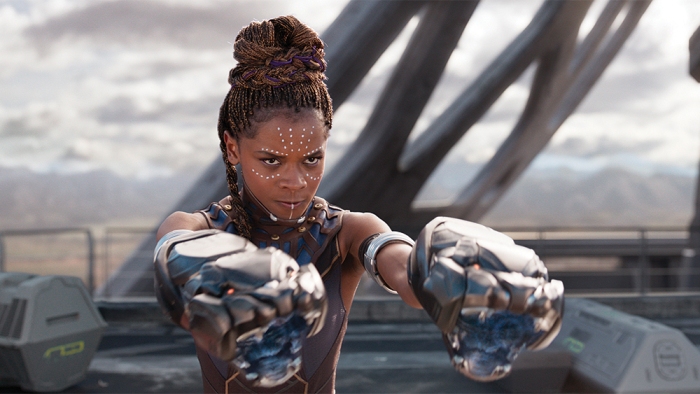 However, if you were to ask me, it was Okoye (Danai Gurira) and to a lesser extent the Dora Milaje, T’Challa’s all-female bodyguard, that really stole the show.  Gurira is already a bad-ass as Michonne on The Walking Dead, but she takes it to a whole new level here.  Gurira has a commanding presence in whatever scene she’s in, a lethal combatant, fiercely loyal to the Wakandan throne, whose fighting skill is highlighted in Coogler’s penchant for long one take action sequences.   Whenever Okoye and the rest of the Dora Milaje were on-screen, you just get a rush of adrenaline because you know something amazing was about to go down.

What really set this movie apart from the rest of the MCU for me was how steeped it was in cultural history and traditions.  Wakanda may be a fictional nation, but Coogler and his team have managed to grab aspects from real African cultures and in Wakanda created an amalgamation that seems truly real.  The colourful garb, the ritual, the tribal dancing, even the interaction of the people in the marketplace all speak to a deep sense of tradition and, as a person who was brought up in Africa, it all gives rise to a society that feels authentic, once that could have easily existed for thousands of years.

It helps that Africa itself is steeped with history and beauty and Coogler is not afraid of using the African landscape to his advantage, showing of its natural majesty, and at times a lot of the shots gave me a Lion King vibe, the trees shot against the sunsets, or animals running in the lush green valleys echoing the opening sequences in the Circle of Life.  Ludwig Goransson’s score complements the African settings perfectly, utilising tribal chants, mixed with drums and marimbas to really highlight Wakanda’s African heritage, and there are parts when the undulations of the Wakandan dances mixed in with the tribal chants created true moments that tapped into your primal nature, creating an almost raw energy.

But for all the strength of the film’s characters and story, I would say that the biggest let down for Black Panther is the special effects, especially in the ending fight sequences.  Any moment that T’Challa in Black Panther garb had to perform a move that was acrobatic in nature, it was easy to see the switch from the real actor to the CG double.  The CG version of T’Challa, or Killmonger for that matter, always had a sense of weightlessness to it, and never felt real.  This unfortunately robbed the fight choreography a lot of its impact.  Hopefully in future films the film makers decide to take a more realistic route in conveying the action in the Black Panther films.

Black Panther is one of the first films in the MCU that felt like it had something to say.  It is refreshing to see that in a genre that is typically seen as just pure entertainment, Coogler has shown that, if done right, it can always carry a powerful message.  I look forward to seeing more social commentary in the MCU and I give Black Panther an 8.5 out of 10.

And of course, stay behind for the end credit scenes. There are two of them. One mid credit and one right at the end.